Archive for the tag “liberal arts”

The Political Importance of the Liberal Arts

We have heard much about the relative decline of the American education system over the past decade (or two, or three). While there is much truth to these various assertions and statistics that document the decline, there have been a wide-range of different diagnoses of the root source of this general decline, as well as different proposed solutions. A common political response is broad rhetoric calling for an increase in development of the so-called STEM fields– Science, Technology, Engineering, and Mathematics. The last two American presidents have both specifically cited this solution in their State of the Union addresses, and have both increased funding for organizations and initiatives in these fields. Additionally, work visas for immigrants to the US are more readily available to applicants with a skilled background in the STEM fields. The thinking is that this type of expertise is necessary for innovation, and that this innovation will drive the economy and secure the future for the ‘winners’ of the most well-educated nation competition. All of this information is rather uncontroversial, and I certainly have no problem with more focus and funding for education on any kind, whether it is STEM-oriented or otherwise. An objection I have, however, is that the emphasis on STEM field competition seems to be in danger of becoming a sort of Zero-Sum game, in which a top-down political and corporate mandate for more STEM education means a corresponding decrease of perceived importance or respect for other fields or types of education that may not seem to lead to instant innovation or economic dynamism. I am speaking especially about the cultural fields of education known as the Liberal Arts, or the Humanities.

The Liberal Arts encompass areas such as History, the Arts (Performing and Visual), Literature, Languages, and Philosophy, among many more. If we wanted to compare them with the STEM fields on more equal footing, we would need to call them by an easily-understood acronym– HALP (or perhaps HALLP?). Since this obviously not very appealing, we will stick with either of the classical phrases of Liberal Arts or Humanities. The original Latin meaning of artes liberales signifies what was thought necessary for a free citizen to study. This is exactly the case I would like to make here in regards to the political importance of the Liberal Arts.

I would characterize professional, technical, or vocational curricula as various types of training, with a goal of developing specific skill-sets for a particular employment. The areas of the Liberal Arts, however, lead to a more universal and well-rounded education. In this sense, Education, derived from its original Latin meaning of “leading out of”, is conducted not for any specific end in itself, other than a more general and complete individual intellectual development and understanding of the world. I would argue that a person with this type of education could be taught virtually any skill with a certain amount of training, but that education itself is a more profound and long-term (ideally lifelong) personal development.

Once again, I have no problem at all with the emphasis on the advanced training in the STEM fields, but I am afraid that, in the current social and political environment, this emphasis can lead to a drastic undervaluing of the conception of a more universal education as represented especially through study of the Liberal Arts. The USA is fortunate to have a strong system of universities which still maintain a rich Liberal Arts tradition. I do not think this system can remain strong indefinitely given the social and financial pressures. When I was entering college over a decade ago, I knew that I wanted to do my ‘major’ in History, not because I was planning for any specific future employment but because I liked it and was interested in it (a quick glance at the topics on this website will reveal that I still hold this and other humanistic interests). In a scene that has no doubt occurred to many students countless times over the past decades, I was always asked by acquaintances and interlocutors “what I wanted to do with that degree after I graduated…become a teacher?” It is maintained by many folks that someone who studies history is either unemployable, or can only work as a teacher (in history, of course). The pressure is great to spend the valuable formative years on training that leads to employment, rather than education that is interesting and intellectually and personally fulfilling.

I recently returned to school and earned a Master’s degree, which was quite rewarding for me even if it did not directly lead to new or higher-paying employment, or necessary on-the-job skills. In the United Kingdom, where I studied, I became aware of the fact that upcoming budget cuts from the government would slash and burn a number of departments throughout the university system. My own department of Classical Studies would soon be phased out permanently, as well as several modern language programs and countless others. This is a failure of leadership.  In America, while I am happy that STEM fields are apparently receiving better funding and support, I have to take strong issue with the harsh budget cuts at the federal, state, and local levels. For shamefully short-sighted reasons, a number of politicians feel that the best way to make up for their (mostly self-inflicted) budgetary shortfalls is to cut funding for education. It is inconceivable how people could be elected or certainly re-elected who support such measures. Many politicians consider the enormously outsized and wasteful military budget to be sacrosanct, while having no qualms in cutting off any education programs whatever (not to mention the select few who want to eliminate the Department of Education altogether). I would submit that re-allocating even 10% of the monstrous “defense” budget towards education would be a more efficient, forward-looking, ethical, and a valuable use of public funds (and who could disagree that a more well-educated population itself would do more for the ‘defense’ of a country than the newest redundant fighter plane or missile). I will rest my case (and my rant) with the support of the two charts below. 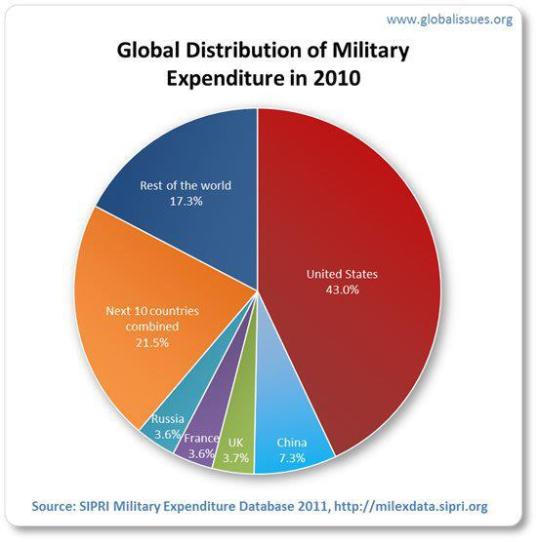 Back to the topic at hand, I maintain that education, especially universal liberal education, is necessary for the maintenance of a healthy democratic society. This is exactly the position of American philosopher and educator John Dewey (1859-1952), who was one of the most important and influential theorists and reformers of modern school systems (not only in America, but in Turkey and China). In several books, especially his 1916 Democracy and Education, Dewey describes how education should be a synthesis between the needs of the individual and the society, whose ultimate aim is to teach a person how to live. As a tireless defender of democracy, Dewey knew that a well-educated population was necessary for the survival of an ordered society. For example, without learning how to think independently and use critical judgment, how can a person be expected to choose leaders or public policies? This type of independent and critical thinking, as well as broad cultural and historical perspective, is developed especially through engagement with the Liberal Arts. Dewey’s progressive style of education fell somewhat out of favor during the Cold War, when technological and scientific education was promoted as essential for national survival (e.g.: the “Sputnik” moment and the Space Race). With the political, financial, and rhetorical emphasis now finding favor with the STEM fields, it is, in my opinion, imperative to not lose sight of the importance of liberal, progressive, humanistic studies as well. While better STEM training can lead to technological, industrial, and economical growth and innovation, a more universal Liberal Arts education can lead to a stronger Democracy– that is, a body politic that is curious, cultured, creative, and critical.

(For some further reading, I can endorse these related opinions about justifying culture by Alain de Botton, why knowledge is not about securing a gain on student debt by Emmanuel Jaffelin, and how higher education became corporatized.)