The Connection Between Walking and Thinking 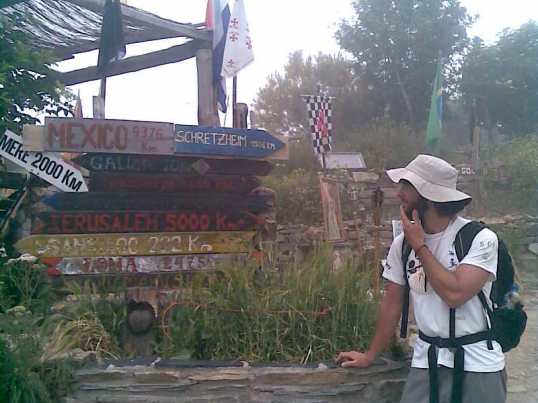 A difficult decision on Day 19 of the Camino de Santiago

I haven’t always been a walker. Where I grew up in America, in a small town in South Carolina, walking was not a normal activity. A town of 30,000 people that was so spread out that there were no schools or stores within walking distance. While at university in the state capital, walking became more common to get around the large campus, but it remained purely a functional rather than pleasurable activity. In the army, I spent a lot of time doing a certain kind of walking–marching at a vigorous pace with a heavy uncomfortable rucksack in too hot, too cold, or too rainy conditions. This, too, did little to foster the love of walking in me. Only after finishing my time in the army did I have the time to cultivate other more relaxing hobbies such as walking for fun.

My first real experience of this new world was the Camino de Santiago, a pilgrimage path from France across northern Spain to Santiago de Compostela, ostensibly the site of the remains of the apostle James. This trip was one of the best and most valuable experiences of my life, and a personal symbol of my starting a new life after unfocused and unhappy years in the army. On the Camino, the only goal everyday is just to walk as far as you want at a pace you want until you decide to stop for the day, which is repeated day after day during the slow progress across Spain. I did the walk alone, though it is so full of interesting fellow travelers that you are never really alone except when you want to be. Every night was a social event at the various pilgrim hostels along the way. There is much to see in the countryside, the changing landscapes, from mountains to high plains to wet forests, and yellow arrows point the way at every crossroads of the 800-kilometer trek. The absence of any other duties or responsibilities means that you have time to let your mind wander freely and really think about whatever you want. You become mentally stronger as you walk, not only because walking is a healthy activity that increases blood flow to the brain, but because you find new challenges for yourself along the way. Some days I pushed myself to see how far I could go in a day (my record was 58 kilometers); some days you just found a quiet place in a wood near a stream to take a break, perhaps a nap, before continuing on to the next village.

The End of the Camino de Santiago at the Atlantic Ocean

Walking puts our human capabilities into perspective. For example, walking was the primary (or only) means of human transportation for a huge majority of humankind for a huge majority of our existence. The distance you can walk in a day has not changed since humans migrated from Africa to Asia and down to South America. The days I spent walking 30, 40, or 50 or more kilometers were exactly the same, quantitatively if not qualitatively, as those spent by countless ancestors searching for new hunting grounds, living space, or fleeing stronger tribes. You feel more connection to the land as you slowly explore it step by step, and a closer connection with other people. Hospitality becomes important when you have nothing but what you can carry on your back and no means of travel except your own feet. Indeed, in the days before its worldwide popularity and commercialization, the Camino was still supported almost exclusively by the hospitality of local people.

In the six years since I completed the Camino de Santiago, I have only increased my walking ability and appreciation. Almost all of my food shopping has been done on foot carrying only what fits in my backpack. I have been able to commute on foot to all the jobs I have had. When I spent a year in Wales doing a graduate degree, I joined the university hiking club and went on a long walk every weekend in the green hills or lovely coast of that wild country. In Italy, my home for the last four years, I have explored as much as possible the nearby mountains of the Dolomites, and started rock climbing again as well.

I wanted to write about this topic because I have recently moved from the city center of a large industrial area to a small rural town on a hillside surrounded by mountains with a panoramic view of the western edge of the Venetian plain. While I have to drive to work and shops for the first time in years, there are also miles of quiet and wooded paths just outside my door that go higher and higher up the hill into the clouds. I was thinking about the countless hours I have spent walking in the last six years, either in conversation with friends or occasionally listening to an MP3 player, but mostly in quiet meditation and contemplation of the ground below my feet, the trees and landscapes around me, and the myriad thoughts that come and go in the mind when unshackled to a specific task at hand. Even if it is not immediately or obviously clear, the time I spend walking is not only good for its physical and psychological aspects, but has also helped me find the inspiration and motivation to develop my intellectual and literary pursuits.

Writers and philosophers have long known and appreciated the benefits of walking. As described by his pupil Plato, Socrates is often seen walking the six miles or so to the Piraeus harbor while interrogating his companions. Plato’s pupil Aristotle famously did most of his discussion while walking around Athens, which is why his followers were called the Peripatetics. Jean-Jacques Rousseau, one of the central figures of both the Enlightenment and Romanticism, wrote one of his last autobiographical works called Reveries of a Solitary Walker, in which he expounded on his thoughts on natural science, political philosophy, and other subjects that were inspired during long walks around Paris. He went so far as to claim that he could not work or even think when not walking. Immanuel Kant followed the same daily schedule every day of his adult life, including the same walk at the same hour rain or shine. It was only delayed one time when he was unable to put down David Hume’s Treatise of Human Nature, which Kant famously claimed had awoken him from his dogmatic slumber. Incidentally, Kant also believed it was healthier to always breathe through the nose while walking. Arthur Schopenhauer followed a similar identical daily routine for the last 27 years of his life, which included a two-hour walk no matter the weather. “All truly great thoughts are conceived by walking”, according to Friedrich Nietzsche, who interrupted his furious work pace for a two-hour walk in the late morning, and an even longer walk before dinner. Perhaps it is no coincidence that the last three men were lifelong bachelors. In his autobiography, Bertrand Russell mentions that from his university days he would walk at least 20 miles every Sunday, and recounts how some of his peers at Cambridge walked much more.

Probably the most famous literary walker was Henry David Thoreau, who wrote a long essay entitled “Walking”. It is filled with many examples and musings on the importance of walking, and is also one of the early inspirations for the environmental movement. Thoreau opens by giving his reason for writing as the following: “I wish to speak a word for Nature, for absolute freedom and wildness, as contrasted with a freedom and culture merely civil–to regard man as an inhabitant, or a part and parcel of Nature, rather than a member of society.” The text contains many learned digressions on philosophy, literature, politics, and local culture, among other things. He says at one point, “I think that I cannot preserve my health and spirits unless I spend four hours a day at least–and it is commonly more than that–sauntering through the woods and over the hills and fields absolutely free from all worldly engagements.”

The connection between walking and thinking is strong. If the most obvious examples I have given are all philosophers and writers, it is because their intellectual currency and production–words and ideas–are most easily wrought while the body and mind are otherwise free to walk at leisure through nature. I would recommend that you make a habit of walking more frequently and, in addition to added health benefits and lower stress, perhaps you will find inspiration for your own project striking when you least expect it.

2 thoughts on “The Connection Between Walking and Thinking”