On this date in the year 1600, the great Italian philosopher, astronomer, and mathematician Giordano Bruno was burned at the stake for heresy at the hands of the Roman Inquisition, and his works were placed on the Catholic Church’s Index Librorum Prohibitorum (list of prohibited books). Ironically, Bruno’s imposing statue stands today at the site where he was executed in the Campo dei Fiori in Rome, a place with a busy market by day and a festive atmosphere every night. The number and names of the great writers and thinkers who have appeared on this shameful list are long and impressive (Descartes, Bacon, Milton, Voltaire, Diderot, Locke, Kepler, Galileo, Pascal, Rousseau, Hume, Kant, Hugo, Sartre, to name 14), and one of whom I write today was added to their esteemed company in 1953. The man is Nikos Kazantzakis, and the work that earned the dubious condemnation is his novel The Last Temptation of Christ. He is also known for his epic Odyssey: A Modern Sequel, as well as Zorba the Greek, Freedom and Death (aka Captain Michalis), and The Greek Passion (aka Christ Recrucified).

Kazantzakis was born in Heraklion, Crete, in 1883, when it was still part of the moribund Ottoman Empire. He studied in Athens, followed by Paris, and traveled widely around Europe, where he became proficient in seven languages besides his native Greek. In 1957 he was one vote short of being awarded the Nobel Prize in Literature. Albert Camus, the winner that year, later said that Kazantzakis deserved the award 100 times more than himself. Alas, Kazantzakis died the next year, and thus also joined the illustrious club of 20th century writers not awarded the Nobel Prize. Kazantzakis lived an eventful and interesting life, and died on the way from China to the North Pole at the age of 74. His tomb in Heraklion has been made into a park on top of the old Venetian walls of the city. His epitaph reads: “I hope for nothing. I fear nothing. I am free.”

Tomb of Kazantzakis in Heraklion, from my visit in January 2011

In Paris, the young Kazantzakis became a student and follower of the French philosopher Henri Bergson. Two of the main ideas of Bergson can be found throughout the works of Kazantzakis– the élan vital, or creative force, that drives men towards their own evolution, and the strong emphasis on intuition over pure reason. Despite the prevalent philosophical criticism directed towards Bergson, these ideas played a part in stimulating the great creativity and productivity of Kazantzakis, as well as the earthy and exuberant spirit that permeates his many works. Another key aspect of Kazantzakis’ oeuvre is the tendency towards assimilation and synthesis of opposing ideas into something greater or more complete. Along with Bergson, one of Kazantzakis’ main influences was Nietzsche, though, as his friend and translator Kimon Friar writes, one can find influences of “such diverse and contrary strains as Buddha, Lenin, Christ, Spinoza, Spengler, Darwin, Homer, Frazer, and Dante.” The synthesis of different ideas came from the confrontation between the Dionysian and Apollonian visions of life, which was described by Nietzsche in his The Birth of Tragedy. Dionysus, the god of wine and revelry, joy in action, ecstatic motion and inspiration, instinct, adventure, song and music and dance; Apollo, the god of peace, leisure and repose, aesthetic emotion and intellectual contemplation, logic and calmness, painting, sculpture and epic poetry.

Kazantzakis considered his Odyssey: A Modern Sequel to be his greatest work; there is a case to be made that it is one of the greatest literary works ever. It was composed over the course of seven drafts from 1924-1938, and it consists of 33,333 lines of 17-syllable verse in Modern Greek, chocked full of metaphor, simile, and obscure dialect from around the Greek archipelago. Its massive size is nearly three times longer than the original Odyssey (12,110 lines), and more than twice as long as the Iliad (15,000 lines). Like each of its ancient forebears, it consists of 24 cantos, and it opens (after a Prologue invocation to the sun) at the point in Odyssey Book 22 directly after Odysseus has slain the young suitors in his palace. “And when in his wide courtyards Odysseus had cut down the insolent youths, he hung on high his sated bow and strode to the warm bath to cleanse his bloodstained body.” So begins the English translation completed in 1958 by Kimon Friar, after four years of labor and constant consultation with the author. It remains not only the sole English translation, but apparently the only translation into any language.

Odysseus on Ithaca yearning for the sea–one of over 20 illustrations by the Greek artist Ghika. (To see a few more, click on the link, then ‘Secondary Sources’, then ‘Drawings by Chatzikyriakos-Ghikas’).

After Odysseus’ long-awaited return to his blessed isle of Ithaca, and after setting things straight in his reclaimed kingdom, it quickly becomes apparent that he is growing bored and disenchanted with his newfound family life and comparatively bucolic existence. Telemachus and Penelope in their own ways each struggle to relate to this barbaric stranger, and the mighty spirit of Odysseus longs for new adventures and the freedom he cannot live without. He therefore casts off for further travels including returning to Sparta and re-abducting Helen, taking her to Crete and abandoning her after fighting against the king there, sailing to Egypt and down the Nile, where he eventually founds a new city and a new religion after instructions from God on a mountain-top. The city is destroyed by earthquake, and last part of the epic is mostly concerned with Odysseus’ inner meditations on life and death, as he continues his journey ever south through Africa. After spreading his religion far and wide, he comes to Antarctica, where he dies upon an iceberg. Archetypal figures he encounters include Prince Motherth (Buddha), Margaro (the Courtesan), the Hermit (Faust), Captain Sole (Don Quixote), the Lord of the Tower (the Hedonist), and the black Fisher-lad (Christ). A distillation of the main idea of O: AMS is the sense of discovery and struggle for its own sake, and for the sake of freedom.

The fictional rewriting (or reinterpreting) of the Gospels and the importance of Judas Iscariot in The Last Temptation of Christ have at least two other interesting parallels, one earlier and one later: from his 1944 collection Artifices, Jorge Luis Borges‘ (another Nobel snub!) typically and metaphysically fictitious story “Three Versions of Judas” (“In order to save us, He could have chosen any of the lives that weave the confused web of history: He could have been Alexander or Pythagoras or Rurik or Jesus; he chose an abject existence: He was Judas.”); and Jose Saramago’s (1998 Nobel laureate…finally a winner!) witty and imaginative The Gospel according to Jesus Christ. The Vatican had no qualms about prohibiting Kazantzakis’ work even though he was Greek, and thus ostensibly under the ‘domain’ of the Greek Orthodox Church (which however lost no ground to the Vatican in the intolerance department by refusing to allow the burial of Kazantzakis in a cemetery, which led to his tomb being situated on the ramparts of Heraklion, with its admirable view of the wine-dark sea). The Vatican continued the controversy by denouncing Martin Scorsese’s 1988 film based on the book (there were several attacks on cinemas showing the movie in France, and the film was banned in Mexico, Chile, Argentina, Turkey, Singapore, and the Philipines). The film is well-made and very close to the book. I enjoyed Willem Dafoe’s Jesus more than Harvey Keitel’s Judas (also appreciated: a rare appearance by Andre Gregory as John the Baptist). 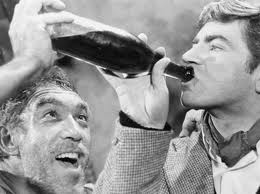 If not TLToC, the most famous work by Kazantzakis is probably his 1946 Zorba the Greek, which was made into a 1964 movie starring Anthony Quinn. The title character is a boisterous lover of life who changes the perspective of the shy intellectual narrator (who is reading Dante’s Commedia at the beginning of the work). When I visited Crete, I found that the filming location–a small fishing village on the Akrotiri peninsula–has hardly changed. Perhaps there are less trees on the hillside where Zorba dug the mine, but there can still be found several ancient monasteries in the secluded area.

It would take too much time to discuss the topics and philosophy of Kazantzakis at greater length. A quick survey of his additional writings include at least 7 well-regarded travelogues (Spain, China, Japan, England, Greece, Russia…), some translations (Homer into Modern Greek, Dante…), 12 novels, numerous memoirs and essays (including Report to Greco), and 8 plays (including Julian the Apostate and Christopher Columbus). Kazantzakis is an example of a life fully-lived, with an unceasing creativity, intellectual curiosity, and longing for freedom. Perhaps this quote from W.B. Stanford’s The Ulysses Theme gives a pertinent description of Kazantzakis by way of his alter-ego Odysseus: “Odysseus is the man who has freed himself from everything–religions, philosophies, political systems–one who has cut away all the strings. He wants to try all the forms of life, freely beyond plans and systems, keeping the thought of death before him as a stimulant, not to make every pleasure more acrid or every ephemeral moment more sharply enjoyable in its brevity, but to whet his appetites in life, to make them more capable of embracing and of exhausting all things so that, when death finally came, it would find nothing to take from him, for it would find an entirely squandered Odysseus.”

Albert Schweitzer, Nikos Kazantzakis, and his wife Eleni in 1955.

6 thoughts on “Nikos Kazantzakis the Greek”