Peter Brown: Epitome of a Historian

Last month, four winners of the prestigious, joint-Swiss/Italian Balzan Prize were announced.  One of them was Princeton University’s Peter Brown, an Irish scholar of Greco-Roman and Mediterranean history.  The prize, which will be awarded in Switzerland on November 18, provides each recipient with €670,000, of which at least half of this must be used to support research work for younger scholars and researchers.  Why would a historian receive such a large prize, and why haven’t you heard of him before?  Let me tell you these answers, and why you, too, might be interested in his work.

Peter Brown is a very influential scholar credited with having created the field of study referred to as Late Antiquity (250-800 AD), the period during which Rome fell, the three monotheistic religions took shape, and Christianity spread across Europe.

His first book, Augustine of Hippo: A Biography, appeared in 1967 and established him as an important scholar at the age of 32.  It was highly praised and seen as an authoritative treatment of the Christian thinker.  A revised edition appeared in 2000 which looked at recently discovered material by Augustine and also provided Brown’s updated worldview looking back as an older man at his youthful work.  “I did not conceive of my biography of Augustine as a contribution only to the religious history of late antiquity…Religion without Society interested me not in the least.”  This shows the importance of the idea of ‘synthesis’ of different, divergent aspects of life when looking at any period of history. 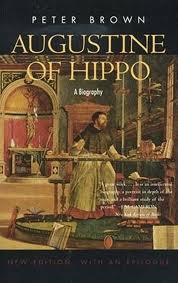 The World of Late Antiquity: AD 150-750 was published in 1972 and created new interest in this previously over-looked period of history.  Edward Gibbon’s Decline and Fall of the Roman Empire, first published in 1776, established the view that Barbarians and Christianity were the two most important factors in bringing about a violent end to the greatness of Rome, followed by almost a millennium of the “Dark Ages”, before the ‘light of learning’ was rekindled in the Renaissance.  This narrative has remained dominant among historians until fairly recently.  Peter Brown was an instrumental force in bringing about an alternate view of this period he had newly christened ‘Late Antiquity’.  His vision is not one of destruction and darkness, but of dynamic transformation.  His works are based not around political and military events, but around ideas like ‘continuity’, ‘synthesis’, and ‘transformation’ in other, non-traditional themes.  This has opened up a whole new world of scholarship, and his historiography focuses not so much on political and military events in the ‘Thucydidean’ manner, but also synthesizes cultural, social, economic, anthropological, and religious themes together in a more ‘Herodotean’ tradition (a dichotomy discussed by his mentor, Italian historian Arnaldo Momigliano).

“An ancient world in which neither Judaism nor Christianity had any place could not be anything for me other than a bright but insubstantial dream.  Only the ancient world in its fateful last centuries could explain the world in which I myself lived–a Protestant in an Ireland dominated by a Roman Catholicism which claimed direct continuity with the post-Roman, medieval past, and a boy who looked always to the Middle East where his father worked and where the ancient monuments of Egypt and the ruined cities of Hellenistic and Roman times stood in the midst of what are now Muslim societies.”  This shows the importance of the idea of ‘continuity’ on his historical worldview, and how his studies of Greek were more focused on the New Testament and the origins of Christianity rather than the polished, but bygone, world of Classical Athens.

His move to California from Oxford in 1978 was a strange and refreshing change for him.  In England he was used to a ‘rigid system’, ‘compartmentalized’ and with a ‘horror for the obvious’.  At Berkeley, he was able to catch up with the ‘obvious questions’ like “Why did paganism come to an end?’ and ‘What caused the rise of the Christian Church?’  He also began to examine the social and sexual lives of ‘normal’ people at a time when sexuality was a popular topic in America.  All his books examine other under-studied themes in this time period, such as the role of saints and holy men, the body and sexuality, and wealth and poverty.  In his treatments of sexuality in The Body and Society, he was also influenced by his friend, the French philosopher Michel Foucault (who had written the three-volume History of Sexuality).

He moved to Princeton from Berkeley in 1986 and fell in love with the libraries there.  They were a great inspiration for him and he dubbed Princeton “the footnote capital of the Western World” because of the superb erudition of the historical and archeological libraries.

His work sparked a new interest in the late Roman period, which has seen an exponential growth in research and publications.  In 2008 the first volume of the Journal of Late Antiquity appeared, dedicated to Peter Brown.  He edits the growing collection of works in the series “The Transformation of the Classical Heritage.”

“He is one of the very few scholars now alive who have, in effect, invented a field of study.  That field, the burgeoning one of late antique studies, has since become an expanding galaxy of scholarship in history, religion, literature and much more for which Brown’s work provided the initiating Big Bang.”  This quote from the introductory remarks to his 2003 Haskins Lecture “A Life of Learning” shows his influence on modern scholarship.

Brown has received numerous awards and honorary degrees, and is a member or fellow of many societies and academies on both sides of the Atlantic.  He reads at least 15 languages (including Old Norse, Syriac, and Coptic), and teaches highly popular courses at Princeton on the history of late antiquity, Byzantium, and the Early Middle Ages, such as “Understanding the Dark Ages”, “Saints and Sinners in Early Byzantium” and “Civilization of the Early Middle Ages”.

Learning about the past through the study of history is crucial if we want to understand our modern society and the issues that confront us.  While Classical Greco-Roman history is fascinating on the whole, the most interesting aspect from my point of view is the slow decline and ‘transformation’ of the Roman empire into a series of European and Middle Eastern states, based around new religions, that still dominant our culture and society today.  No one has had more influence in this field or written with as much erudition as Peter Brown.  His award is well-deserved, and will hopefully help to raise awareness about the important events of the past in order to better understand our place in the present. 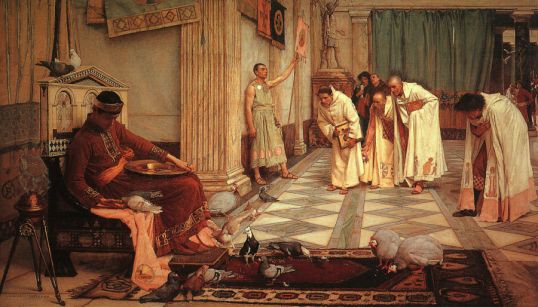 “The Favorites of the Emperor Honorius”, J.W. Waterhouse, 1883. Shows the sense of moral decadence of 5th-century Rome as traditionally viewed by 19th-century England.

2 thoughts on “Peter Brown: Epitome of a Historian”